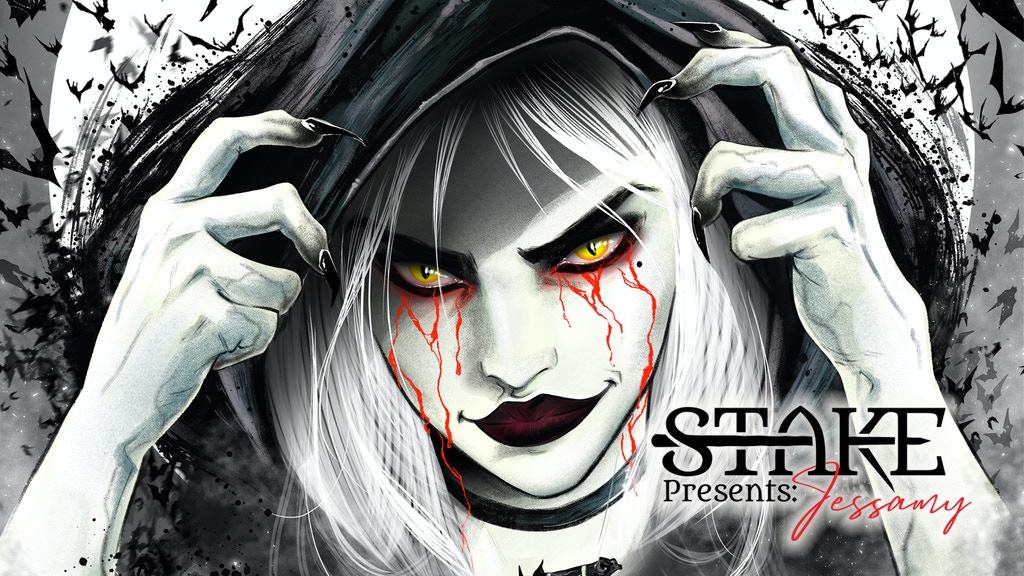 Created by David A Byrne

Set in the world of Stake, Jessamy sets out to investigate a rumor of blood-drinking monsters in 18th century America.

Latest Updates from Our Project:

It's almost over! It's been surreal, but I'm ready, because that means we're one step closer to getting these books to you!

I can't believe we hit 400 backers and are still rolling! All of you have made this a wonderful campaign, so thank you again.

Eric Chen is working on laying colors on his cover now, so when that's finished I'll share, but anyone who has pledged for $30 or more will be getting that for free! (It will also be available as an add-on through BackerKit)

I'll be back tomorrow as we wind down and near the end.

“RDW” is a tale about coping. Coping with loss, responsibility, command, addiction, withdrawal and more. It also features social commentary, PTSD, corporate interests and much more, in a Dark Fantasy setting – all of that, in a striking visual package.

It is Asterix – Mister Robot – Samurai Champloo - The Witcher books, Promethea and the game GRIS, rolled into One.

Its as if the harsh reality of real life problems were informed by a world with Dragons and Spell-casting. Sometimes this can be the solution to all our problems and sometimes it can be the sole cause for them. In this particular case, we're stuck in the middle, with Astrid, our protagonist, not knowing where to turn.

CHECK IT OUT HERE!

We're nearing the end of the campaign, but you have all really made this a joy.

I can't wait to get these books printed and into your hands...who am I kidding? my hands too!

We're closing in on two wonderful milestones, the 8th Stretch Goal at $22,500 and an amazing number of backers...400!

Thanks to all of you, this campaign has blown the last one out of the water. We're just 3 days from buzzer and the real work beginning on my end!

Wailing Blade is high-adrenaline fantasy adventure, set in the dark future of mankind.

When his father is sentenced to death at the hands of the legendary Headtaker, bandit prince Tychon must find a way to save him, or fall to the Wailing Blade himself.

Thousands of years after mankind’s fall from the stars, the remnants of humanity live under the brutal thumb of tyrannical rulers who wield futuristic technology that to the masses, is indistinguishable from magic. These petty warlords squabble over the dwindling resources of a dying earth, while they themselves bow down to the Tyrant of Minturn, who crushes all who oppose him with his legendary executioners – warriors who wield the deadliest weapons from mankind’s starfaring days. The most feared of these executioners is the Head Taker, who wields the mighty and unstoppable Wailing Blade – a sword which screams louder than the victims it beheads. Each year, he travels the breadth of the Tyrant’s empire, dispensing justice and enforcing his will. Standing against the Tyrant are scattered clans of bandits, like the Windcleavers. Desperate scavengers, they defy the Tyrant by raiding his caravans, and keeping forbidden technology for themselves. Their prince, Tychon, sees an opportunity to pluck a great prize from the Tyrant’s grasp, setting  himself on a path that leads to a confrontation with death itself, and the WAILING BLADE!

CLICK THE IMAGE OR HERE TO CHECK IT OUT!

Good evening to all our amazing backers!

John Giang is an incredibly busy guy, so I knew he was going to be past our launch date on delivering the cover and it was worth the wait!

John absolutely slayed this cover (see what I did there?). John's cover is available along with all the others in trade dress, virgin, foil, and metal!

All hell breaks   loose in a quaint northern Michigan community when a team of   in-over-their-heads bank robbers kills a beloved Sheriff’s Deputy. In a small   town with BIG secrets, local detective Richard Holton races to peel back the   layers of a depraved down home conspiracy before the bungling Federal Agents   assigned to the case send everyone involved to ground.


That's all for tonight, I hope everyone has a great rest of their weekend!

While I've been anxiously awaiting the results of the election (as I'm sure many of you have as well), we crossed two awesome milestones; $20,000 and 350 backers!

Now that we've unlocked Eric Chen's cover (which he is working on diligently), we are opening a really cool little bonus that ties in directly with the theme of the campaign!

This will be printed on a similar parchment paper to the Archival edition of the book and feature the letter Ben Franklin writes to the Ministry in the story!

We've also added a few more original art sketch options from my buddies Joe Schmalke and Rich Woodall! You may know Rich and Joe from the myriad titles they've created, but they're also the driving force behind Scout's imprint Black Caravan:

These are add-ons, so you must be pledged for at least the lowest physical tier to add them!


Ending soon, another one to check out!

The ghost story, one of the oldest forms of narrative which has terrified and intrigued audiences for millennia. Now four early ghost stories, mostly forgotten in the depths of literary history are brought together for the first time in one graphic novel adaptation.
Early Haunts collates four early supernatural tales which each inspired some of history's greatest horror publications.

This one ends in a little over 24 hours, so click here to check it out now!

I just wanted to wish everyone a happy halloween from the whole Stake team and Jessamy!

Andraste, by Honor Vincent, is a 12-issue indie comic series about what war does to a family, with liberal smatterings of Celtic mythology, alternate planes of reality, and legionary hijinks.

Andraste Volume 1 collects the first three issue story arc of the series: "Call it Peace," "The Mapmakers," and "Leylines," in a full-color, 88-page trade paperback! Andraste is written by Honor Vincent, illustrated by Abel Cicero and Unai Ortiz de Zarate, colored by DC Alonso, and lettered by Micah Myers. If you love comics like Conan the Barbarian and Red Sonja, Conquest, Sláine, and Sara, and historical retellings like Circe and The Song of Achilles, you'll love Andraste.

Stay safe out there, back soon!